Posted on April 5, 2018 By admin Categories: Flights Comments are off for this post 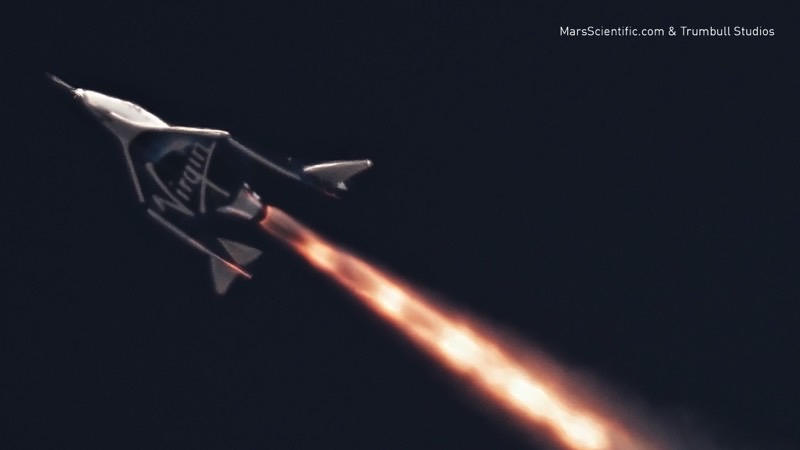 Image by MarsScientific.com and Trumbull Studios

Earlier today Virgin Galactic completed the first rocket powered flight with their spacecraft VSS Unity. This is huge step forward when it comes to reaching their ultimate goal of bringing customers to space. Overall, it was the 12th flight test for the spaceship VSS Unity.

Back in January Richard Branson’s spacetourism company had their 7th glide test flight. During that final glide test and the test before that in August, Virgin Galactic did pretty much everything except fire up their rocket motor. After succesfully completing these dry tests, we knew a rocket powered flight was the next step.

Today was the big day for Virgin Galactic and the sister company The Spaceship Company, who created the vehicles. In the early morning WhiteKnightTwo carrier aircraft pilots Mike Masucci and Nicola Pecile flew to an altitude of 46,500 feet. From there they dropped VSS Unity with pilots Mark “Forger” Stucky and Dave Mackay on board. They fired up the hybrid (nitrous oxide / HTPB compound) rocket motor and reached a height of 84,271 feet (25 km). They reached this after accelarating to Mach 1.87 thanks to a rocket burn that lasted 30 seconds. That’s a supersonic flight.

Branson has said several times he expects to reach space this year. Seems like Virgin Galactic is still on track to reach that goal. Next up is analyzing all the data that was generated during this flight. And within a couple of months we should see tests with full duration rocket burns and reaching (much) bigger heights.